‘How much have we been duped and sold down the river by the response?’

This article appeared in On Line Opinion, 31 August 2020, A better way of dealing with Covid-19

I was waiting to see my local Dr this week and scrolled through Google News on my mobile. I was shocked to hear Sky News host, Alan Jones, state that ‘people are being swept up into a sense of hysteria and alarmism around COVID-19’ (10 August 2020).

Alan Jones slammed our political leaders for not showing leadership in the Covid-19 pandemic. He said more people died in Australia in 2019 from influenza than from Covid-19 in 2020.

And there was no closing of borders and wrecking the economy in all states and territories.

It would be misplaced to discard Jones’ views because you disagree with his worldview and place him in the ‘right wing’ category of commentators. It would be wrong-headed to do that as the evidence has not been presented.

1. People dying from flu – with a vaccine

His point was, ‘More people are dying from the flu with a vaccine than are dying from Coronavirus without a vaccine’. ‘Eighty per cent of Covid-19 cases are considered mild. But nearly 99% of Covid-19 patients experience the same symptoms – fever, dry cough, and fatigue – at different levels of severity’.

A check of the Australian statistics revealed a total of 705 influenza-associated deaths were notified between January and September 2019, compared to 417 in 2017. However, this figure reached 745 deaths in 2017, reflecting a later seasonal peak. These counts were not statistically significant in their differences (654-759 vs 692-800).

The 2017 season had moderate clinical severity based on ICU admissions among hospitalised cases’ (Global Biosecurity, Severity of the 2019 influenza season in Australia- a comparison between 2017 and 2019 H3N2 influenza seasons).

There you have it: 705 influenza-related deaths in Australia in 2019. To date, there have been 313 Covid-19 related deaths. So, flu deaths (even with a vaccine) account for double the number of Covid-19 deaths.

However, in an attempt to deal with the alleged Covid-19 pandemic the …

2. The Australian economy has been wrecked 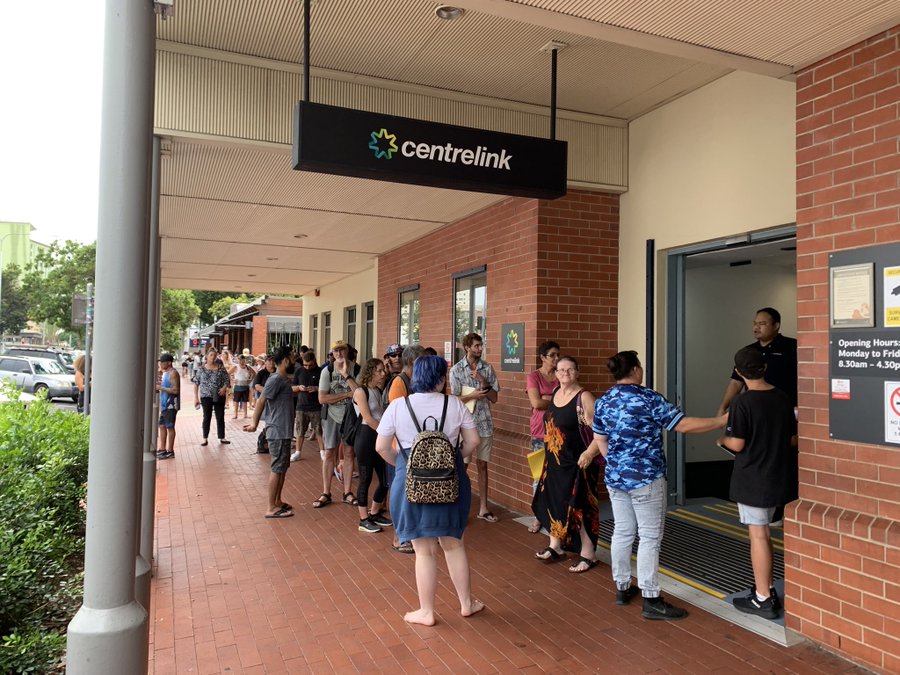 What has happened to our states and nation with closure of businesses, closure of borders, and quarantine? It has wrecked our economy, caused many to be placed in unemployment queues, and sent small and medium-size businesses to the wall.

Australia now has a national debt crisis. Federal Treasurer, Josh Frydenberg, presented an ‘optimistic’ deficit of $184.5 billion for the current financial year. That will take zillions of years to pay off.

The Commonwealth government has assigned almost $150 billion to prop up our economy. To this is added $35 billion from the States and $26 billion in tax cuts, which the Treasurer brought forward.

ABC News reported (20 July 2020), ‘For the financial year just ended, UBS’s chief economist George Tharenou is tipping a deficit of $81 billion and for the current year a massive $194 billion. The only way the Government can fund that is through raising debt’.

Why don’t we listen to the research authorities such as the leading British medical journal, The Lancet, which concluded ‘the U.S.’s major weapons against the Coronavirus–––lockdowns and wide testing––do not reduce death rates’?

The Lancet study’s assessment was:

The conclusion to this research was that the Queensland government’s approach of full lockdowns and widespread Covid-19 testing is not associated with a reduction of serious medical cases and deaths.

What’s the alternative? Is there a national policy for Australia to emulate? The model set by Taiwan, with a similar size population to Australia (23.8 million), is worth considering. It consisted of these elements:

There was quick action to control the country’s borders.

On January 20 the Central Epidemic Command Center (CECC) was activated to coordinate cooperation across government agencies and between government and businesses.

The national health insurance administration and immigration agency ‘worked together to identify suspected cases for COVID-19 testing, integrating their databases of citizens’ medical and travel history’.

Like Australia, since late March all new arrivals in Taiwan must quarantine for 14 days.

The CECC partnered with police, local officials and telecom companies to enforce the quarantine. This included support of mobile phone tracking.

Care for those quarantined was guaranteed by citizens who asked about the health of people in quarantine and basic daily supplies were provided, if required.

A 24-hour helpline was available, provided by Taiwan’s Center for Disease Control collaborated with two tech companies – HTC and LINE. This created a chatbox which allowed people to report their health status and get advice about the virus’.

Taiwan tests about 5,800 samples a day. A health worker distributes hand sanitiser at Ningxia Night Market, Taipei in late May.

To avoid the panic buying of face masks, the government rationed their distribution and ramped up production. In February, the government partnered with the Machine Tool & Accessory Builders’ Association and manufacturers, investing in new machinery to produce surgical face masks. In return, manufacturers have to sell the masks back to the government at an agreed price. This cost approximately $6.8 million (What coronavirus success of Taiwan and Iceland has in common, The Conversation, 29 June 2020).

Iceland has a much smaller population (341,600), but has implemented a strategy similar to Taiwan’s. As of 29 June 2020, there were 1,838 confirmed Covid-19 infections; 1,816 have fully recovered; and 10 deaths were recorded. The government took quick action through its National Crisis Coordination Center on January 31, 2020.

5. What was the outcome in Taiwan?

It is important to remember that Taiwan learned its strategy as a result of the SARS epidemic in 2003. Thus, it was more prepared for the Covid-19 outbreak than many countries.

6. Why not listen to these professionals?

Professor Mark Woolhouse, an epidemiologist at the University of Edinburgh, is advising the British Government on Covid-19. He said that there is no proof that Covid-19 is transmitted from pupil to teacher in school anywhere in the world (with one exception in Australia). Therefore, ‘closing all schools completely during Britain’s lockdown might have been a mistake…. Statistics show 15 children and teenagers have died of coronavirus in England and Wales since March, 0.03 per cent of the total deaths’.

Australia is listening to the developers of a Covid-19 vaccine in the UK. ABC News, Brisbane (19 August 2020) reported Prime Minister Scott Morrison as saying the vaccine developed by Oxford University is ‘one of the most advanced and promising in the world’.

In addition, ‘the Australian Government has secured the rights to manufacture millions of doses of the potential vaccine — called ChAdOx1 nCoV-19 or AZD1222 — if trials are successful and it’s approved. Plus, it’ll be free’.

Why aren’t ScoMo and his cabinet listening to another Professor of theoretical epidemiology at Oxford University, Sunetra Gupta? She is a top disease expert who has urged Australia to abandon its ‘selfish’ and ‘self congratulatory’ lockdown tactics and embrace a Swedish-style herd immunity strategy to fight Covid-19.

Professor Gupta said the Scandinavian country of Sweden has ‘done quite well in terms of deaths’ – despite its record of 5,300 fatalities not comparing with Australia’s much lower level.

The Daily Mail (4 July 2020) reported: ‘Sweden holds the fifth-highest rate of deaths per capita in the world after the Nordic nation took its own path and declined to close its restaurants, bars, schools and shops to fight the spread of the virus.

Sweden took the soft line, as opposed to Australia’s tough stand. The Daily Mail provided a photograph of Swedish locals lapping up the sun next to a social distancing sign which they ignored. The Swedes were sunbaking at Malmo, Sweden in June. They took their own liaise-faire line, in spite of recommended discipline. Could this have as much to do with the Swedish worldview of liberty than to abiding by the recommended Covid-19 course of action?

While the Swedes ignored their government’s recommendations – with no fines for infractions – Australia’s shopping precincts of shopping centres, restaurants, pubs, clubs and streets remain deserted. The tourism industry around Australia is ruined by the strict cross-border restrictions.

‘No proper checks and balances to lockdown measures’ (President of the Rule of Law Institute of Australia, Robin Speed).

‘Health advice should have been released months ago regarding lockdowns, keeping children out of school, or shutting businesses’.

‘You can’t travel more than 5km from home for essential items (Melbourne); curfew is from 8pm-5am; limiting numbers in restaurants. Shut the borders’. Where’s the evidence to justify these actions?’

‘I’m telling you there is none’ (Jones).

‘The central issue is, “How much have we been duped and sold down the river by the response?”’ (Alan Jones).

It took a shock jock to alert me to these facts – yes, facts – about the Covid-19 virus:

We have been tricked into allowing unelected officials – such as Queensland’s chief health officer, Dr Jeanette Young – to influence government policy. This policy includes:

These measures were taken with the view of restricting Covid-19 deaths. I didn’t read public evidence to support these policies.

There are many infectious diseases for which there is no vaccine and these are controlled in the community, e.g. Dengue, HIV/AIDS, Malaria, Hookworm infection, Venezuelan haemorrhagic fever, Chistosomiasis, and more.

The whole suite of strategies used to prevent Covid-19 from spreading across Australia should have been released months ago to provide the evidence to implement these policies.