Since the original documents of the New Testament (known as the autographa) are no longer available to us, what evidence do we have that the Gospel of Matthew was written in Aramaic or Hebrew? How soon after Jesus’ crucifixion was it written?

This has been an issue raised by both scholars and the laity. John Wenham, in his Redating Matthew, Mark & Luke (1992) claimed that the dating of Matthew was ‘more complicated’ than for Mark and Luke. ‘The universal tradition of the early church is that Matthew “in the Hebrew dialect” was the first gospel’. For Wenham, he argued ‘with some reserve that Matthew was indeed the first gospel, and that it may possibly have been written in Hebrew or Aramaic, and that it was known to Mark’. He left open the ‘question whether Mark knew Matthew in a Semitic or a Greek form’ (Wenham 1992:xxiii). Wenham’s ‘chronological table’ of the synoptic gospels dates Matthew about AD 40, Mark about AD 45, Luke about AD 54, and the Acts of the Apostles AD 62 (Wenham 1992:xxv -xxvi). With qualifications and alternatives not stated, J A T Robinson argued for a dating of the Gospel of Matthew to about 40-60+ (Robinson1976:352).

A couple of the laity online wanted to debate this, ‘I believe Matthew to be the oldest writing of the Synoptic Gospels. The original Script was written in Hebrew for the Jew’.[1] A retort was: ‘Our Matthew was pretty clearly composed in Greek; it is not a translation. In any case, most Jews of that time read Greek rather than Hebrew; that is why the OT had been translated into Greek long before’.[2]

1. What does early history indicate?

Let’s check out the information from early Christian writers.[3] 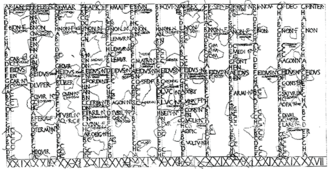 Papias (ca 70-163), bishop of Hierapolis, Asia Minor was said to be ‘a hearer of John and a companion of Polycarp’. There are five extant writings of Papias and Irenaeus claimed that these were the only writings from the pen of Papias (see ‘Writings of Papias’, Philip Schaff). Irenaeus’s words were, ‘For there were five books compiled (suntetagmena)[4] by him’ (Irenaeus, Against Heresies, 5:3.4).

In Papias’s writings, known as Expositions of the Oracles of the Lord, it is stated by Eusebius of Caesarea, that he wrote: ‘So then Matthew wrote the oracles in the Hebrew language, and every one interpreted them as he was able’ (in Eusebius, Church History, 3.39.16). Papias lived within 50 years after the death and resurrection of Christ.

Details of the life, ministry and writings of Papias are found in St. Papias (New Advent, Catholic Encyclopedia, 1911). 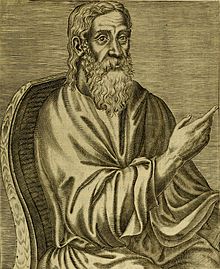 Eusebius also wrote that Origen (ca 185-232) stated: ‘Among the four Gospels, which are the only indisputable ones in the Church of God under heaven, I have learned by tradition that the first was written by Matthew, who was once a publican, but afterwards an apostle of Jesus Christ, and it was prepared for the converts from Judaism, and published in the Hebrew language’ (in Eusebius, Church History 6.25.4).

About AD 180, Irenaeus, bishop of Lyons in Gaul, wrote:

Matthew also issued a written Gospel among the Hebrews in their own dialect, while Peter and Paul were preaching in Rome and laying the foundation of the Church. After their departure, Mark, the disciple and interpreter of Peter, did also hand down to us in writing what had been preached by Peter. Luke also, the companion of Paul, recorded in a book the Gospel preached by him. Afterwards John, the disciple of the Lord, who also had leaned upon his breast, did himself publish a Gospel during his residence at Ephesus in Asia. (Against Heresies 3:1:1).

Information about Origen’s life and ministry are available at, Origen and Origenism (New Advent, Catholic Encyclopedia, 1911).

This early church historian (ca 260-341), wrote himself: ‘For Matthew, who had at first preached to the Hebrews, when he was about to go to other peoples, committed his Gospel to writing in his native tongue’ (Eusebius, Church History, 3.24.6).

Details of the life, writings and ministry of Eusebius are found in Eusebius of Caesarea (New Advent, Catholic Encyclopedia, 1909).

2. What about the dating of Matthew?

How would you respond to this online post on a Christian forum concerning the dating of Matthew and Mark?

The date of the writing of Matthew is thought to be around 50 A.D. and Mark around 68 A.D. None of this is important to our Salvation of what book was written first, and if you are a born again believer, you should know that. Men waste more time on defending their knowledge or what they know about God instead being known by God. We all spend too much time on talking instead of listening to God. The Lord is weeping.[5]

I replied:[6] I wished he would document the sources from where he obtained the information that Matthew was written around AD 50 and Mark around AD 68. To say that it ‘is thought to be’ hardly presents convincing evidence.

Everett Harrison, in his Introduction to the New Testament (1971) gave reasons for contradicting your view and then draws this conclusion: ‘A date for Matthew sometime between 70 and 80 seems to fit the circumstances [which he has articulated] to best advantage. It may be of interest that Eusebius held that Matthew had been written after Mark and Luke’ (Harrison 1971:176). The reference that Harrison gave was to Eusebius stated:[7]

6. For Matthew, who had at first preached to the Hebrews, when he was about to go to other peoples, committed his Gospel to writing in his native tongue, and thus compensated those whom he was obliged to leave for the loss of his presence.

7. And when Mark and Luke had already published their Gospels, they say that John, who had employed all his time in proclaiming the Gospel orally, finally proceeded to write for the following reason. The three Gospels already mentioned having come into the hands of all and into his own too, they say that he accepted them and bore witness to their truthfulness; but that there was lacking in them an account of the deeds done by Christ at the beginning of his ministry (Eusebius, Church History, 3:24.6-7).

The person online wanted to brush aside the importance of the date of composition of Matthew with this language, ‘None of this is important to our salvation of what book was written first, and if you are a born again believer, you should know that ‘.

I beg to differ. Knowledge of salvation is obtained from the Scripture. Does the book of Matthew contain reliable information or knowledge about the Gospel? One element in determining the reliability of Matthew’s Gospel includes external evidence. This evidence includes knowledge of authorship, date of writing, and the recipients of the letter.

It may not be important to this Christian, but for me as a Bible teacher it is one piece of information that I seek – to determine the authenticity and validity of the Gospel of Matthew.

The earliest evidence we have available to us through the secondary source of Eusebius is that Papias and Origen supported Matthew’s gospel originally written in the Jews own dialect, which would be Hebrew or Aramaic. Eusebius gives his own primary evidence that Matthew preached to his own people and wrote his Gospel in his native tongue. As a Jew, Matthew would have spoken Hebrew or Aramaic as his language.

Harrison’s investigation of the dating of Matthew concluded with a possible date was about AD 70-80. However, Robinson placed it between 40 and 60. Wenham’s calculation was about AD 40.

[4] The original Greek used was in Irenaeus’s writings and it is here transliterated because of this website’s difficulty in uploading documents with Greek characters.