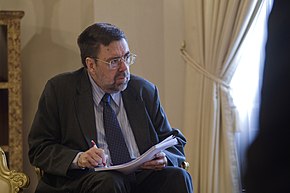 Read the recommendations at the front of this book and you’ll get a view of the ecumenical nature of it for Christians. They range from evangelical, Protestant Anglican, John Dickson (author of A Hell of a Life) to Chris Uhlmann, Channel 9 political editor and newspaper columnist, to Peter Comensoli, Catholic Archbishop of Melbourne.

Greg Sheridan, The Australian‘s foreign editor, is one of the nation’s most influential national security commentators, who is active across television and radio and also writes extensively on culture.

The first half was promising

In this half, Sheridan writes for a general Christian audience – “about the compelling, dramatic, gripping characters you meet in the New Testament” (p. 1). Then at the beginning of chapter 5 one epilogue is from Mother Teresa, “Never travel faster than your guardian angel can fly.” An Essential Poll in Australia in 2017 found “about 40 per cent of Australians believe in angels, which sounds about right” (p. 132).

Sheridan let us know his position: “I certainly believe in Angels. We Catholics have a sacrament called Confirmation, which confers on the recipient the gifts of the Holy Spirit” (p. 134). “Angels are our friends. Surely—surely—we need all the help we can get” (p. 146).

The second half lost its power

An epilogue at the beginning of ch 6 by Larry Siedentop states, “It is hardly too much to say that Paul invented Christianity as a religion” (p. 147). Sheridan has blinkers on to place this kind of statement at the opening of a chapter. There would not be a conversion of Saul on the Road to Damascus without what happened on Golgotha:

Saul was still breathing out murderous threats against the Lord’s disciples. He went to the high priest 2 and asked him for letters to the synagogues in Damascus, so that if he found any there who belonged to the Way, whether men or women, he might take them as prisoners to Jerusalem. 3 As he neared Damascus on his journey, suddenly a light from heaven flashed around him. 4 He fell to the ground and heard a voice say to him, “Saul, Saul, why do you persecute me?”

Saul was persecuting “the Lord’s disciples,” so Christian disciples were present. “Who are you, Lord?. . . I am Jesus.” Sheridan is flatly wrong. The start of Christianity emerged because of Christ’s death on the cross.

Greg Sheridan told of Gemma’s unlikely helper in Tanzania at the School of St Jude. “That helper is St Jude, the Apostle, the patron saint of desperate situations and hopeless causes. . . . When she asks St Jude to help her, she is not asking him to exercise any independent, magical power. She is asking him to pray to God on her behalf, in a normal expression of what Christians call communion of saints” (p. 215).

This is not a biblical view but a Roman Catholic perspective of praying to the saints. It has no biblical warrant. This is how the Roman Catholic Church explains this practice:

We are to approach God directly. That’s the teaching of both the Old and New Testaments: “Let us then approach God’s throne of grace with confidence, so that we may receive mercy and find grace to help us in our time of need” (Heb 4:16 NIV). To whom should Christians pray? “Listen to my prayer, O God, do not ignore my plea” (Ps 55:1 NIV). Therefore, it is false teaching to pray to the saints when Scripture instructs us to pray to God.

Sheridan is rather provocative in this statement – which is his judgement:

I have never met an Australian Christian politician I would say is not sincerely trying to live out their ideals and implement policies for the good—from Penny Wong on the left of the Labor Party to Andrew Hastie on the conservative side of the Liberal Party. It’s legitimate for a politician to think: these policies are the best way I can give effect to my Christian principles; it’s entirely wrong, except in extreme cases, for them to say, only this policy is a Christian policy, or, if you don’t follow my policy, you’re breaching Christian teachings (p. 241).

I find that to be too simplistic and anti-biblical. There are principles in government that are based on biblical foundations and those that are quibbling over a Christian base, don’t know the Scriptures.

Because of this [the sinful desires of their hearts to sexual impurity for the degrading of their bodies with one another], God gave them over to shameful lusts. Even their women exchanged natural sexual relations for unnatural ones. In the same way the men also abandoned natural relations with women and were inflamed with lust for one another. Men committed shameful acts with other men, and received in themselves the due penalty for their error.

Sheridan doesn’t want to make a judgement about which Christian principles are for the good. God has done it for him in Rom 1:26-27 but he doesn’t want to accept it. Acts 5:29 gives another principle: ‘Peter and the other apostles replied: “We must obey God rather than human beings!”’ (Acts 5:29)

Sheridan’s book is splendidly written by an experienced journalist. For me, it began with great promise but ended with anti-biblical compromise. It’s a promoter of ecumenism, i.e. generic Christianity, that dilutes the cutting edge of Christianity to get rid of the specific Gospel penetrating qualities.

If you have a high view of biblical authority and believe in the Gospel – as I do as a Protestant evangelical – don’t recommend this book. Its sub-heading is: “The urgent case for Jesus in our world.” Which Jesus? I’m convinced Sheridan promotes a compromised Jesus, which I can’t support under any circumstances.