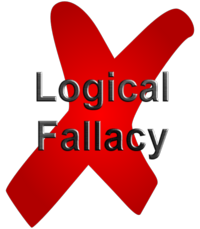 Over the last 15 years, I have participated in 6 Christian forums[2] and one secular forum worldwide.  I’ve discovered that one of the most common ways to high jack a discussion has been with the use of logical fallacies.

What is a logical fallacy? To put it simply, it is an error in reasoning. It is a way of stating an argument where the the premises given do not support the conclusion in a statement. It is illogic in action. When this happens, it is difficult to have a logical discussion with a person.

I’ve been greatly helped in understanding the use of logical fallacies by Dr. Michael C. Labossiere, the author of a fallacy tutorial. You can find his material on The Nizkor Project site.

I mention two common fallacies that I see on Christian forum sites:

A.    The red herring fallacy

A Red Herring is a fallacy in which an irrelevant topic is presented in order to divert attention from the original issue. The basic idea is to “win” an argument by leading attention away from the argument and to another topic. This sort of “reasoning” has the following form:

1. Topic A is under discussion.

3. Topic A is abandoned.

This sort of “reasoning” is fallacious because merely changing the topic of discussion hardly counts as an argument against a claim (Fallacy: Red Herring).

This can happen on any Christian forum when a person, say, is discussing reasons for opposing once-saved-always-saved (OSAS) with Bible verses. A person can reply that that is not what the Bible teaches and then give a group of Bible verses to oppose the person who opposed OSAS. What does this do? It does not deal with the exact verses that a person used to oppose OSAS. The response was off and running with pro-OSAS verses. This is using a red herring fallacy and logical discussion is brought to a halt as the issue is not being dealt with – the verses that oppose OSAS.

Another fallacy that often arises is:

B.    The straw man fallacy

The Straw Man fallacy is committed when a person simply ignores a person’s actual position and substitutes a distorted, exaggerated or misrepresented version of that position. This sort of “reasoning” has the following pattern:

1. Person A has position X.

2. Person B presents position Y (which is a distorted version of X).

This sort of “reasoning” is fallacious because attacking a distorted version of a position simply does not constitute an attack on the position itself. One might as well expect an attack on a poor drawing of a person to hurt the person (Fallacy: Straw Man).

I have seen this fallacy from time to time in two situations:

(a) When anti-charismatics try to expose the ‘error’ of Pentecostals. A false view of Pentecostals is not difficult to construct when one sees extremism in the movement. However, when all Pentecostals are painted with the extremist brush, it is using a straw man fallacy.

(b) Calvinists who paint Arminians as Pelagians or semi-Pelagians. This is using a straw man fallacy.

There are a number of other fallacies I’ve seen used on Christian forums. These have included:

Ad hominem. Most moderators of Christian forums exclude this fallacy because it most often is a flaming or goading technique.

Begging the question (or circular reasoning). This is where a person reaches a conclusion but it is based on his/her premise. Of course that will be the conclusion reached because the person’s presuppositions demand that conclusion.

What say that we watch each other and the fallacies we might use in any responses on Christian forums or in personal discussions?

Some other sites dealing with logical fallacies include:

‘‘Logical fallacies and the art of debate’;

‘Logically Fallacious‘. This is a very large website with the most extensive range of logical fallacies I’ve encountered online.

[1] I started a thread with this title at Christianity Board, Christian debate forum, ‘Logical fallacies high jack discussion’, OzSpen#1, available at: http://www.christianityboard.com/topic/21503-logical-fallacies-high-jack-discussion/ (Accessed 26 May 2015).