This is a reply to Peter FitzSimons, ‘David Goodall leads the way with choice we should all get to have’ (Brisbane Times, The Sydney Morning Herald, 13 May 2018).[1]

What a way to start an article! Where are the pro-lifers and fierce opponents of euthanasia?

Peter, we are in the cities, towns and streets across the nation. The mass media generally don’t seek us out to give the reasons why we oppose assisted suicide and euthanasia. Our views don’t get much air-play. They’re not accepted in an Australian culture where people do what is right in their own eyes.

FitzSimons promoted his pro-euthanasia view triumphantly, asking if Dr David Goodall got it right or wrong and whether we are on a slippery slope in our culture.‘David Goodall ended his life at 104 with a final powerful statement on euthanasia’.[2]

If I accept this reasoning, I should have quit counselling suicidal youth and others through 30 years of counselling. Many considered life was pointless and they could be aged 14, 44 or 84.

I should have forgotten about my suicide awareness training programmes. Disregard referring suicidal people to Lifeline (ph 13 11 14) and Beyond Blue (ph 1300 22 4636) for counselling.

Why bother with trying to show there are better alternatives and providing compassionate support in making those decisions? Getting assistance in killing oneself is better! Right?

If they wanted to kill themselves, my advice should have been, ‘Go ahead and do it ASAP. That’s your choice. Good luck!’

Dr Goodall and those who promote assisted suicide set dangerous precedents. They place life and death decisions on the level of everyday choices.

Think of the ramifications!

FitzSimons asked: Where is the problem in any of the Swiss procedures and the way Goodall died?

Many! I will address only four of them:

FitzSimons promotes moral relativism. In his words, ‘It’s not your choice (opponents of the right-to-die). It’s our choice (euthanasia supporters)’.

What is a world view?

A world view is a way of viewing or interpreting all of reality…. A world view is really a world and life view. That is, it includes within it value indicators or principles by which one makes value judgments…. One set of world view “glasses” can be exchanged for a different world view. In science this kind of major change is called a “paradigm shift.” In religion it is called a “conversion” (Geisler & Watkins 1984:11-12).

Fitzsimons’ reasons to support euthanasia provide an example of the world view of moral relativism in action. Ethical decisions and choices of right and wrong are determined by individuals or group choices in this world view.

2.   The logical consequences of moral relativism

What are the logical consequences of such a view?

Dr Goodall and Exit International consider that euthanasia ‘supports an individual of sound mind’s right to choose and implement a peaceful death at a time of their choosing’.[3]

The late Labor MLC of the NSW upper house, Paul O’Grady, maintained ‘voluntary euthanasia is a question of basic human rights. It is about the right of individuals to choose for themselves the quality of life they want and when they no longer enjoy that quality of life’.[4] Should such a view be applied to people of any age, including teenagers who claim life has no meaning?

The University of Southern Queensland (Toowoomba) published, ‘Business Ethics: boardroom pressures in an age of moral relativism’,[5] affirming this world view in Australia.

Outside of the life/death sphere, history and contemporary experiences tell us that moral relativism has had serious or deadly repercussions, such as paedophilia, terrorism, the Nazi holocaust, Port Arthur massacre, alleged bribery and fraud of the financial sector, mayors unfit for office, cricket ball-tampering, etc.

Some will call this better way a choice because it is not forced on anybody. Australia was built on the moral ethics and government has its foundations in the absolutes of the Judeo-Christian world view.

Why do we need absolute standards of right or wrong in the euthanasia debate? Imagine living in an Australia where murdering anyone either voluntarily or involuntarily was considered right for the country.

We need standards that are beyond fickle human decisions. This does not require us to toe the line of the Judeo-Christian world view. It invites us to participate in upholding the absolute standards of all human beings who are made in the image of God.

So to kill such a person is to take over the sovereign God’s authority in life and death decisions. It is an attack on God’s sovereignty, in the name of human freedom.

John Piper summarised God’s view of life and death and whose right it is to take human life. ‘It seemed to him that in the euthanasia discussion, ‘Human life, which is distinct from all other earthly life in being created in the image of God and designed to exist forever, is the gift of God. And he owns it and may do with it as he please, take it any time he please without wronging anyone, and this is his unique prerogative’.

These verses of Scripture (from the ESV) support that view:

He gained the understanding from these passages of Scripture ‘that giving and taking life is ultimately God’s right. Human life in its fullest sense is a miracle that only he can create and only he has the right to take, unless he has given the state the right to use the sword in various settings to take life. But as far as medical things are concerned, I think it is clear that God’s rights are at stake here and we dare not intrude on what he alone has the right to do’ (Piper 2016).

Why invoke the commands of the Deity, the Lord God? Put simply, it’s because He tells the truth about life and death decisions. The New Testament use of ‘truth’ not only means the difference between true and false facts, but also that which conforms to reality, as opposed to mere reality.

I recommend this interaction on the need for God and moral absolutes: Ravi Zacharias – Absolute Moral Law & the Existence of God (YouTube).

Read the Scriptures and see the diagnosis of truth (reality) for Australia. They fit like a hand in a glove. You will find the cause of the problems of sin, evil and disease (Genesis 3), the impact on creation and on human beings all around us. From where do crime and violence come? The solution to the moral madness is found through God’s absolute moral standards (10 commandments, Exodus 20; the Sermon on the Mount, Matthew 5-7).

The solution to the human sin dilemma for individuals is found through Jesus Christ’s salvation (John 3:16; Acts 4:12) and the ultimate end of the wretched condition on earth will come at Jesus Christ’s second coming (Acts 1:9-11; Revelation 1:7).

What about the diseases inflicted on human beings, the deformity in vegetation, and animals who suffer?

Chantal Sébire is an example of a beautiful looking French woman who became a picture of gross facial deformity when a cancer from her left eye spread to engulf her face. This could be used as an emotional example to support assisted suicide. However by doing that, I would commit an ‘Argument by Emotive Language’ (see below) and it is false reasoning. Why? It does not provide evidence of the benefits and disadvantages of assisted suicide in any society. I do not provide this example as a reason to promote euthanasia, but it is the type of example used to persuade people and governments to legalise assisted suicide. I oppose such irrational thinking. 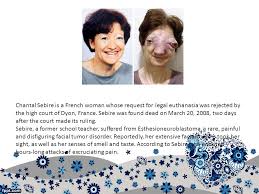 In the euthanasia debate, the Christian world view lays out the reality of life and death decisions, as opposed to mere appearances. It declares the truth of reality.

That’s not how euthanasia promoter, Philip Nitschke, sees it. He remonstrated with this insulting attack on religious freedom, ‘Just bugger off christian lobby’.[6]

Our nation was built on the Judeo-Christian foundation of the 10 commandments and Jesus’ Sermon on the Mount. But euthanasia takes life and death decisions and places them in autonomous hands.

Former medical practitioner and now Presbyterian minister, Neil Chambers’ Christian response to euthanasia got to the more foundational issue: ‘Who rules: God or [people]? Who has the right to determine who lives and who dies?’

His assessment rocks the foundations of human freedom: ‘The euthanasia proposals being discussed in Australia and other parts of the world today seek to give to one group of humans—doctors—the right to end human life. They do this without reference to God, or to the circumstances under which God has said human life may be taken’.

They justify the morality of euthanasia by giving human beings ultimate authority and freedom, ‘accountable only to themselves and thus free to do as they wish with their own lives’ (Neil Chambers).[7]

Where would Australia be if we stuck to God’s sovereign and absolute standards of right and wrong in life and death decisions?

4.   Appeal to the use of emotive language is a fallacy

FitzSimons’ choice to promote euthanasia by an appeal to a 104-year-old scientist who considered life had no meaning, commits an ‘Argument by Emotive Language’.[9]

It is faulty reasoning when he used an emotive example of an aged man euthanised in Switzerland and emotional language such as, ‘So where are you now, you fierce opponents of euthanasia and the right-to-die? How many of you, honestly, can look at the triumphant -you heard me – passing of the 104-year-old … and say that he got it wrong, that society is on a slippery slope, et cetera?’ .

This argument provided no logical reasons to support or reject euthanasia. He replaced reason with emotion to try to win the argument. ‘It is a type of manipulation used in place of valid logic’ (Dr Bo Bennett).[10]

We know from countries with legal euthanasia, no matter the safeguards, they have moved from voluntary to involuntary euthanasia and many cases are not reported in the data.[11]

FitzSimons asked what my choice would be regarding death and my farewell hymn. This article should make that obvious. I have asked my children to sing these songs at my funeral service: ‘How Great Thou Art’ and ‘I’d Rather Have Jesus’ (Jim Reeves), and ‘What a Day That Will Be’ (Jim Hill, the song’s composer).

Legalising euthanasia in Australia would have ramifications way beyond the apparent ‘goodness’ of such decisions.

[3] Exit International. ‘Our philosophy’, available at: https://exitinternational.net/about-exit/our-philosophy/ (Accessed 25 May 2018).

[8] Quora. What is an absolute moral standard, and how is it different from a non-absolute one? Available at: https://www.quora.com/What-is-an-absolute-moral-standard-and-how-is-it-different-from-a-non-absolute-one (Accessed 25 May 2018).