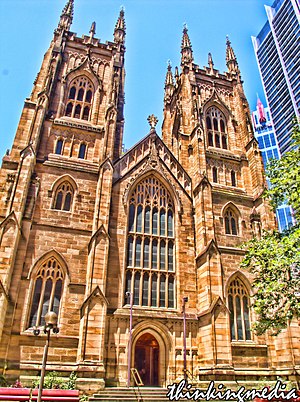 This article was published in On Line Opinion, ‘Anglicans, Christmas, and the birth of God?’ (3 December 2020)

I’m an orthodox evangelical believer. I watched the Christmas Eve service 2011 which the Dean of the Cathedral, Phillip Jensen, led from St. Andrews Cathedral, Sydney, telecast on ABC1 in Australia. It was a magnificent Christ-centred service led by Dr Jensen. I know his church is a member of the evangelical Anglican diocese of Sydney which has been an orthodox stalwart in the midst of an Anglican church that has become theologically liberal in many states.

What is happening to the liberal Anglicans in Australia? The Rev. Dr. Mark Thompson, at the Sydney ‘Lambeth Decision Briefing’, St. Andrew’s Cathedral, Sydney, Friday 14th March 2008, wrote of ‘The Anglican Debacle’. Here he stated the obvious for that denomination in Australia that biblical Christianity has struggled under the Anglican umbrella. There was never a time when it was uniformly accepted by the church hierarchy.

He pointed out that early Anglicans such as Latimer, Ridley and Cranmer were burnt at the stake with the consent of most of the rest of the bishops in Mary’s church.

Primate of Australia, Archbishop Dr Philip Freier, attributed the decline in the Anglican Church to a number of factors, singling out a culture ‘that no longer “carries” Christianity.’

A Sydney Anglicans news’ release about the event in 2011 stated it was the first time in many years ABC Television screened an evangelical Christmas Eve service. It was chosen by the ABC for a 6pm Christmas Eve service. It featured Dean Phillip Jensen, the Cathedral choir, guest musicians and orchestra. Jensen said: ‘This broadcast provides a great opportunity to express the message of the birth of our Lord in a genuinely modern and Australian fashion.’

What’s at the heart of the Anglican problem?

Senior Associate Minister at St John’s Anglican Cathedral, Parramatta, Sydney,  and a prolific blogger is Rev. David Ould, who became a minister in 2013. His beef with the undermining of Anglicanism is very different from the liberal wing of the denomination. He considers one of the main problems is with integrity of the ministers.

What? He is crystal clear on what he means. He used an illustration from the world of advertising: If you were a marketing director for a major drinks’ company who drank the opposition’s leading brand of milk at a press conference, you would expect to lose your job if the company had any integrity.

However, what has happened with the Anglicans? They discuss an aging population, schisms over sexuality issues, young people preferring experiential over traditional worship, etc. However, Ould does not see

this at the core of the problem. For him the nucleus of the issue is over promises made by bishops which states: ‘I firmly and sincerely believe the Catholic faith and I give my assent to the doctrine of the Anglican Church of Australia as expressed in the Thirty-Nine Articles of Religion, The Book of Common Prayer and the Ordering of Bishops, Priests and Deacons; I believe that doctrine to be agreeable to the Word of God.… I do solemnly and sincerely declare my assent to be bound by the Constitution of the Anglican Church of Australia.’

Then the bishops set about rejecting the standards set by Scripture, refusing to support the content of the Apostles’ and Nicene Creeds, fail to accept the 39 Articles as the ‘standard of doctrine’, not using the Book of Common Prayer as the worship standard, and rejecting some of the Constitution of the Anglican Church of Australia.

What then should these prodigal bishops and ministers do, since they deny fundamentals of biblical Christianity and of the Anglican requirements for ordination? C S Lewis got straight to the point of what should happen:

It is your duty to fix the lines (of doctrine) clearly in your minds: and if you wish to go beyond them you must change your profession. This is your duty not specially as Christians or as priests but as honest men.… We never doubted that the unorthodox opinions were honestly held: what we complain of is your continuing in your ministry after you have come to hold them (‘Christian Apologetics’, 1945:1).

Evangelical Anglican: Christmas as the birth of God 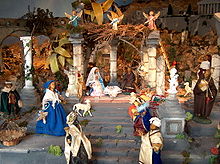 This phrase caught my attention from Phillip Jensen several times in the telecast as he spoke about Christmas being a celebration of ‘the birth of God.’ Could this kind of language give the wrong impression? He has a brief article online that is titled, “Celebrate the Birth of God” (published 2 December 2005). In it he writes of Christmas as a time to ‘celebrate the coming of the Lord Jesus, who is God in the flesh’ and ‘give thanks to God for the great privilege of celebrating the birth of our Mighty God in this way.’

He seems to be trying to communicate that Jesus is both God and man, but does the language, ‘the birth of God’ have potential problems? These are my questions:

Phillip Jensen clarified this in 2013, ‘We celebrate more than the birth of the baby, Jesus. When we retell the history of his birth, we are celebrating the meaning and purpose of God’s action in our salvation.’ That’s a better way of putting it.

The prophecy of Christ’s birth in Isaiah 9:6 states, ‘For to us a child is BORN, to us a son is GIVEN.’ For this one event of the incarnation, there are two distinct matters.

(2) A SON is given. The Son was not born; Jesus the Son was GIVEN. He was from eternity.

I am not sure that Phillip Jensen made this distinction as clearly as he should have. I consider that he ought to have made it unambiguous about the humanity of Jesus (a child is born) and the deity of Jesus (the eternal Son is given). God was not born on the first Christmas Day. God the Son has always existed as God and he became a human being on that first Christmas Day but there was no ‘birth of God’ as such.

We know this from a well-known verse such as John 3:16, ‘For God so loved the world that he gave his one and only Son, that whoever believes in him shall not perish but have eternal life.’ So, God SENT his Son. This presupposes that the Son was always with the Father and was ready to be sent.

The apostle Paul is clear about what this means at Christmas time. According to Romans 1:3-4, ‘concerning his Son, who was descended from David according to the flesh  and was declared to be the Son of God in power according to the Spirit of holiness by his resurrection from the dead, Jesus Christ our Lord’ (ESV).

The eternal generation of the son is orthodox Christian doctrine. The Nicene Creed affirms the eternal nature of the Son:

We believe in one Lord, Jesus Christ,
the only Son of God,
eternally begotten of the Father,
God from God, Light from Light,
true God from true God,
begotten, not made,
of one Being with the Father.

I have been warned not to be another Nestorius

Since I see that Christmas celebrates the birth of the humanity of Jesus, the God-man, some have written to me warning that my view could come close to the false teaching of Nestorius (ca. 386-451). Most Christians would not know of Nestorius and his teaching.

The Nestorian controversy came to a head at the Council of Ephesus in 431. This Nestorian website gives a summary of the Christological controversies surrounding the teaching of Nestorius who was bishop of Constantinople in 428. He came from the Antioch school and was taught theology there by Theodore of Mopsuestia.

He opposed a new theological teaching of theotokos. This affirmed Mary was the ‘God-bearer’ or ‘Mother of God.’ Nestorius was concerned with this teaching when applied to Jesus because it could infer that the Son of God had a beginning and then suffered and died.

I confirm none of these things could happen to the infinite God. Therefore, instead of a God-man, Nestorius taught there was the Logos and the ‘man who was assumed.’ He favored the term ‘Christ-bearer’ (christotokos) as a summary of Mary’s role, or perhaps that she should be called both ‘God-bearer’ and ‘Man-bearer’ to emphasise Christ’s dual natures of God and man.

Nestorius was accused of teaching a double personality of Christ – two natures and two persons. He denied the charge, but the term Nestorianism has always been linked with such a teaching.

Yes, he was from the Antiochene ‘school’ (now in Turkey) and wished to emphasise a distinction between Christ as man and Christ as God. He did not deny that Christ was God. He said, however, that people should not call Mary thetokos, the ‘mother of God,’ because she was only the mother of the human person of Christ.

Great opposition developed against Nestorius’s teaching and his opponents charged that he taught ‘two sons’ and that he ‘divided the indivisible.’ Even though he denied this charge, Nestorianism continues to be linked with the teaching.

Nestorius was opposed by Cyril, patriarch of Alexandria, who was one of the most ruthless and unrestrained of the major early bishops. Cyril ‘condemned Nestorius’s works by issuing twelve anathemas [stong curses] against him. Nestorius responded in kind. The two men were harsh individuals and fierce antagonists.’

The possible danger in my discussing the birth of the humanity of Jesus at Christmas, which is true, and rejecting anything to do with the birth of God (as the eternal God cannot be born), is that when I speak of the God-man Jesus, that I try to attribute some of Jesus’ actions to his humanity and some to his divinity. That is not what I’m saying, but I want to make it clear that God cannot be born, either as ‘Mary the mother of God’, or the celebration of ‘the birth of God’ (Phil Jensen) at Christmas.

The language that ‘God was born’ at Christmas does not provide biblical warrant for orthodox, biblical thinking. God, the Son, the second person of the Trinity, has existed eternally. At that first Christmas, the Son obtained his humanity through being born to a virgin. This inaugurated the God-man nature of Jesus, but the Son never ceased being God from eternity. That the first Christmas celebrates the ‘birth of God’ in Jesus, is false theologically. It was the ‘fullness of time’ (Gal. 4:4) at which God the Son became the God-man.

It’s unusual for an orthodox evangelical such as Phillip Jensen to define the incarnation as the ‘birth of God’ in his Christmas Eve service at St. Andrew’s Cathedral, Sydney, and telecast on Australian ABC1 television. I have written to him to get his views, with much of the information provided above.

God cannot be born. That’s an oxymoron. God is from eternity and is always eternally God so there can be no ‘birth of God’ or ‘God was born’.

As for the Anglican churches in Australia, they are losing attendances wholesale because ministers and bishops refuse to be loyal to their ordination vows. They suffer the consequences of lack of integrity in support of scriptural authority and other commitments made at ordination.

If Anglican ministers affirmed the full authority of Scripture at their ordinations and stray from that path they should do as C S Lewis recommended, ‘You must change your profession’ to be honest men.