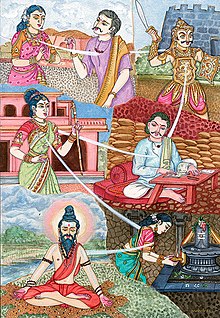 It is not unusual to encounter people (Christians) on Christian forums who claim they believe in reincarnation and state they are Christians. They try to defend their views from reinterpretation of Scriptures such as Hebrews 9:27.

Reincarnation refers to the indestructible soul, but not in the presence of the Lord God Almighty.

The Western definition of death is known as “the irreversible cessation of all vital functions especially as indicated by permanent stoppage of the heart, respiration, and brain activity”. Although this is true to define the end of someone’s life, there are many who believe that there is more to life even after death. Those who worship Hinduism believe that death does not necessarily mean the end. They follow the idea of reincarnation which means that the soul is indestructible and repeatedly takes on a physical body until moksha. Moksha is a term in Hinduism which refers to the various forms of liberation or release which occurs when the cycle of dying and rebirth ends. It is the central concept in Hindu tradition and included as one of the four main goals in human life (Reincarnation in Hinduism).[1]

So reincarnation involves death of the physical body, taking on a new body and this happens over and over with a cycle of dying and rebirth.

2.  An encounter with a Christian reincarnationist

‘almost universally as the Scripture that refutes reincarnation. “And as it is appointed for men to die once, but after this the judgment,…“. For a long time, I could not resolve Scripture with my personal experience. Then it hit me – that passage does not necessarily say that men only live once. It may only say that after every lifetime, there is a mandatory judgment (some call it a “life review”). The phrasing is a bit clumsy; perhaps it is even intentionally so?
There are Christians who believe in reincarnation. I guess I’m one of them’.[2]

Again: ‘Yes, but my point is that Hebrews 9:27 does not necessarily say we only die once, it may say (paraphrasing) that for every death there is a separate judgment. In other words, suppose you had 6 successive lives- after each death, there is a mandatory judgment. 6 lives, 6 judgments’.[3]

Heb 9:27 doesn’t necessarily say dying only once. How does he know that?

How does he know that it may mean 6 successive lives are followed by deaths and 6 judgments?

He’s moved in Heb 9:27 from ‘does not necessarily say that men only live once. It may only say that after every lifetime’, to …

In one of his columns, he wrote:

Every descent of the soul into this world has a specific Divine purpose. This is the case whether it is the soul’s first descent or a subsequent reincarnation. There are many aspects of gilgul haneshamot—reincarnation of the soul—that are complex and intricate beyond the scope of this response’ (Why & When Does Reincarnation Occur?)

The situation becomes more bizarre with his referral to …

the Lubavitcher Rebbe, Rabbi Menachem Mendel Schneerson, of righteous memory, explains that only reincarnations into human beings is limited to “three strikes and you are out.” These souls can still continue to be reincarnated, first as kosher animals, and then, in decreasing order, as non-kosher animals, plants, and even eventually as inanimate objects, as long as the need exists.[5]

He turned to Rabbi Yeshaya HaLevi Horowitz, as provided by the Kabbalists, in his classic work Shnei Luchot HaBrit (Shaloh) for an explanation of why reincarnation was needed in the Jewish world. The three reasons are:

1. There are some sins for which the cleansing in the spiritual realm alone does not suffice. Thus souls who have sinned and have not properly repented whilst alive, are sometimes forced to undergo a second round of life in this world as rehabilitation for sins previously committed….

2. Reincarnation provides an opportunity for souls to perform those commandments that they were unable to do in a previous incarnation….

3. There are some souls who do not descend for their own growth or perfection. Rather, the only reason they return to this earth is to benefit others. This can be to help out an individual or the entire generation, spiritually or materially (Horowitz in Shurpin).

It is important for the emphases of my article to note that Shurpin provided not a shred of biblical evidence to support his view.

My Jewish Learning website has an article by Rabbi Louis Jacobs[6] who is (What Judaism says about reincarnation) is unafraid to denounce reincarnation: ‘there are no references to the idea in the Bible or the Talmud , and it was unknown in Judaism until the eighth century CE, when it began to be adopted by the Karaites [a sectarian Jewish group] (possibly, it has been suggested, under the influence of Islamic mysticism)’.

Rabbi Louis Jacobs said: ‘Some modern Jews are attracted to the occult and believe in reincarnation. Otherwise the doctrine has had its day, and is believed in by very few modern Jews, although hardly any Orthodox Jew today will positively denounce the doctrine’.[7]

4.  Biblical reincarnation is Greek to me.

I asked this person on the Christian forum: Do you read NT Greek? If you do,

you will know that the Greek uses hapax in Heb 9:27, ‘it is appointed for people to die hapax‘. What is the meaning of hapax? Does it mean to die multiple times, 10 times, twice or once?[8] I was trying to get out of him how he KNEW Heb 9:27 did mean one or only once.

How did he know that it doesn’t include the meaning of ‘only’ when you don’t read and understand Greek? Let’s check the leading Greek lexicon, Bauer, Arndt & Gingrich (1957:89) which gives the meaning of hapax:

BAG includes this example under the ‘actual numerical concept of once’ = once only. Why did Jesus appear this one time? Verse 26 states: ‘to do away with sin by the sacrifice of himself’. He came only once, hapax, to do that. How often was Jesus sacrificed for sin? The same number of times a person dies (in v. 27) – only once.

BAG again places hapax as an ‘actual numerical concept of once’ in Heb 9:28: ‘prospher? hapax eis anapher? hamartia‘ = offered once to bear sins.

So the once in Heb 9:27 means one time only, numerically. There is no second time death and rebirth over and over. Reincarnation is not taught in Scripture.

So Jesus paid the price for sin only once, just as human beings die only once. A. T. Robertson, the leading Greek scholar of the 20th century, stated: ‘Once for all to die, as once for all to live here. No reincarnation here’ (Word Pictures in the New Testament, vol 5, p. 404).

Just as a cloud dissipates and vanishes,
those who die will not come back.
They are gone forever from their home—
never to be seen again.

Here are a couple articles that oppose transmigration of the soul in the Bible:

‘Reincarnation in the Bible’;

‘What does the Bible say about reincarnation?’

Try this one for bending Scripture to make it fit one’s own preconceived ideas:

Speaking of Scripture, there is an interesting passing reference to what may be reincarnation. John 9:

As he went along, he saw a man blind from birth. 2 His disciples asked him, “Rabbi, who sinned, this man or his parents, that he was born blind?” 3 “Neither this man nor his parents sinned,” said Jesus, “but this happened so that the works of God might be displayed in him.”

The disciples ask Jesus if a man sinned before his birth. Thus it’s a question about reincarnation. They ask in a rather nonchalant way, as if it’s not even an unusual topic. The Lord answers it another way, but the argument goes that if there was no such thing, wouldn’t He have come right out and said, “There’s no such thing as reincarnation”?[9]

These are not places which shout “reincarnation” in bold letters but they do form part of a greater picture.

Ecclesiastics 1:4: “A generation departs and a generation comes.” If this would refer to the normal flow of generations, a generation cannot come after the previous generation has gone. Rather this refers to the same soul(s) returning in consecutive lives.

Job 1:21: “Naked I left my mother’s womb and naked I shall return there.” Who comes back to their mom’s womb? Enter reincarnation.

These are just a few samples. There are a number of such places scattered throughout the Torah. The bulk of what we know about reincarnation is from the Oral Torah and these are just a few places where this dynamic is evident in an almost offhand manner in the written part.

The question remains though: Reincarnation is a major theological issue. Why is such a major issue not explicitly discussed in the Written Torah?[10]

The answer is simple. It is not found in the first five books of Moses (Torah) or the rest of the Old Testament. It is not a teaching of the New Testament. I’ve provided examples of Scripture twisting by Jewish leaders to try to make the OT fit with reincarnation. The end result is Scripture manipulation.

The fellow on that Christian forum was engaged in a similar kind of promotion of false doctrine while trying to make it look like he knew what he was talking about. The hapax factor found him out.

Reincarnation is ‘the belief that the soul, upon death of the body, comes back to earth in another body or form’ (Dictionary.com 2019. s.v. reincarnation). It also is called rebirth and transmigration, referring to human being’s soul being reborn in another body. Hinduism and Buddhism believe in reincarnation.

The primary reason for reincarnation is ‘that a person may be reborn successively into one of five classes of living beings (god or human or animal or hungry ghost or denizen of Hell) depending on the person’s own actions’ (vocabulary.com n.d. s.v. reincarnation). This is designed to cleanse in the spiritual realm of sins not forgiven in the first life.

It was seen that a few orthodox Jews have engaged in, (a) invention of the doctrine, or (b) eisegesis of a couple OT texts to try to support OT reincarnation.

It was shown from the Greek hapax that there is no biblical validity in promotion of reincarnation as, ‘Everyone must die once. Then they are judged’ (Heb 9:27 ERV). Hapax refers to the numeral one or once.

Therefore, any kind of Christian or Jewish promotion of reincarnation is a hoax.

[2] ChristianForums.net 2019. Why do so many Christian believers do not believe in the possibility of reincarnation? KevinK#8. Available at: https://christianforums.net/Fellowship/index.php?threads/why-do-so-many-christian-believers-do-not-believe-in-the-possibility-of-reincarnation.79566/ (Accessed 6 June 2019).

[5] Shurpin’s footnote at this point was:

There is, however, an important distinction between souls that reincarnate into human bodies and those that reincarnate into other creatures. When a human soul incarnates into an animal, it does so merely as an observer. That is to say that this creature is like any other creature of its kind, except that a reincarnated soul is trapped inside. The excruciating pain and sorrow the soul experiences while trapped inside the animal, forced to live and observe the life of this creature while powerless to control its behavior, serves to rehabilitate it.
Additionally, while this soul cannot really rehabilitate itself as it has no control over the action of the creature, it can sometimes be rehabilitated through the actions of others, for example, by someone reciting a blessing over it, if it is kosher (footnote 5, Why & When Does Reincarnation Occur?’)

[7] My Jewish Learning. What Judaism says about reincarnation. Available at: https://www.myjewishlearning.com/article/reincarnation-the-transmigration-of-a-jewish-idea/ (Accessed 14 September 2019).