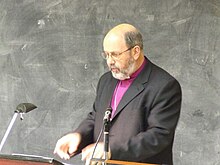 What is N. T. Wright’s position regarding evangelical Christianity? Rowan Williams, (hardly known for any evangelical persuasion) on the back cover of N. T. Wright’s magnificent exposition, The Resurrection of the Son of God (Fortress Press 2003) states:

No one could read this without learning something fresh about almost every verse of the Synoptics, and being provoked into new wrestling with the text … an Evangelical energy that will make it a book for prayerful meditations as well as intellectual stimulus (emphasis added).

I believe that to call myself an evangelical Anglican, and/or

an Anglican evangelical, is not to precipitate an identity problem, let alone a crisis, but rather to place myself at that point on the ecclesiological map where I am free to learn how to be a Bible person, a Gospel person, a Church person (emphasis added).[2]

Ridley Hall at Cambridge University, where Wright has taught, gives this explanation of the meaning of ‘open evangelical’:

We are unashamedly evangelical in our commitment to the authority of Scripture, the need for personal faith, the uniqueness of Christ and the free gift of eternal life for humankind only through his death on the cross. We recognize the truth of orthodox Christian belief as expressed in the early Creeds of the Church. We are open in a number of ways:

Open to the world around us. If we are to communicate the Gospel effectively we must be engaged in a process of “double listening” to the Bible and to the world, hearing the questions and the insights of others around us, and working to hear the message of the scriptures in the light of this.

Open to God’s work in other Christian traditions. Evangelicals do not have a monopoly on the truth, and through partnership and dialogue we seek to be open to learn from what God has done and is doing in other parts of His Church. This refers to other Christians in our own Western setting, but must also increasingly include the voices of our fellow believers in the Two-Thirds World.

Open to God saying new things through the Bible and His Spirit. Being under the authority of scripture means we may need to be ready to change our mind as we understand more fully.

I don’t choose to use the label about myself [evangelical or liberal theology]. I’m not a big fan of labels.
I’m not a member of the green party either.[3]
I have been an active member, including Warden and lay-preacher, in an evangelical parish for the last few years. I’ve also been teaching Catholic RE. I’m comfortable in both contexts.[4]

[1] This was my response (I’m OzSpen) to ebia, Christian Forums, Christian Scriptures, “Documentary Hypothesis” #36, available at: http://www.christianforums.com/t7619203-4/ (Accessed 30 December 2011). Ebia did not want to identify herself as an evangelical (Anglican) or a theological liberal.

[3] However her icon on Christian Forums indicates that she identifies with the Australian Greens Party.