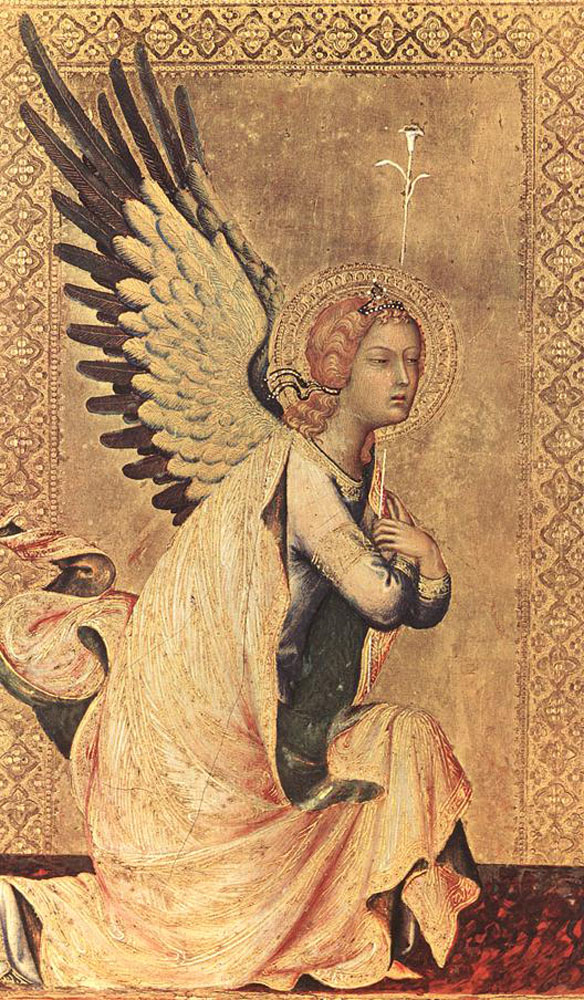 Simone Martini The Angel Of The Annunciation.jpg – Wikimedia Commons

What does it take to understand and believe in the virgin birth of Christ?  Wayne Grudem’s assessment is: “Certainly such a miracle [as the virgin birth] is not too hard for the God who created the universe and everything in it — anyone who affirms that a virgin birth is ‘impossible’ is just confessing his or own unbelief in the God of the Bible” (1994, p. 532).

There was no biologically literal virgin birth, no miraculous overcoming of barrenness in the birth of John the Baptist, no angel Gabriel who appeared to Zechariah or to Mary, no deaf muteness, no angelic chorus that peopled the heavens to announce Jesus’ birth to hillside shepherds, no journey to Bethlehem, no presentation or purification in Jerusalem, and no childhood temple story.  Indeed, in all probability Jesus was born in Nazareth in a very normal way either as the child of Mary and Joseph, or else he was an illegitimate child that Joseph validated by acknowledging him as Joseph’s son.  All that can be stated definitely is that the echoes of the status of illegitimacy appear to be far stronger in the text than the suggestion that Jesus was Mary’s child by Joseph. (1992, pp. 157-158)

This is speculation, a la Spong!  Out of the mind of Spong, produces what Grudem predicted — a confession of Spong’s unbelief in the God of the Bible.  He confirms this when he writes that “no recognized New Testament scholar, Catholic or Protestant, would today seriously defend the historicity of these [birth] narratives [in the Gospels]” (1992, pp. 44-45).  Really?  It’s too bad that Spong doesn’t give an even-handed approach to the historicity of New Testament material and a recognition of scholars outside of his liberal theological persuasion.  Even in Spong’s own generation, today, an eminent scholar and professor of New Testament at Denver Seminary, Dr.Craig Blomberg (1987), has provided verification of The Historical Reliability of the Gospels.

He wouldn’t be given credence by Spong because Blomberg is an evangelical who would be regarded with suspicion.  After all, Blomberg, being a professor at an evangelical seminary, would be one of those “fundamentalist Christians [who] distort the Bible by taking it literally” (Spong, 1992, p. xvi).  Spong regards himself as one of those “liberal Christians [who] distort the Bible by not taking it seriously” (1992, p. xvi).  What an admission of his presuppositions regarding the authority of Scripture!

Blomberg (1987), while acknowledging that his is “a ‘minority report’ among biblical scholars worldwide” (p. 255), endorses  the historical veracity of the Gospels:

The gospels may be accepted as trustworthy accounts of what Jesus did and said.  One cannot hope to prove the accuracy of every detail on purely historical grounds alone; there is simply not enough data available for that.  But as investigation proceeds, the evidence becomes sufficient for one to declare that what can be checked is accurate, so that it is entirely proper to believe that what cannot be checked is probably accurate as well.  Other conclusions, widespread though they are, seem not to stem from even-handed historical analysis but from religious or philosophical prejudice. . .  It has been argued here that the gospels must be subjected to the same type of historical scrutiny given to other writings of antiquity but that they can stand up to such scrutiny admirably.  (1987, pp. 254-255)

J. Gresham Machen did that admirably in the early twentieth century.  “The eternal Son of God, He through whom the universe was made, did not despise the virgin’s womb! What a wonder is there! It is not strange that it has always given offence to the natural man,” [Machen (1930 [1974], p. 394)]  This described the awesome event of God becoming man in the person of Jesus Christ through the virgin conception. The natural man’s questions seem to evoke natural responses from those who do not accept the authoritative claims of the Scripture.

John Dominic Crossan (1994a), of the Jesus Seminar, embarks on his reasoning against the virgin birth:

He adds:  Marcus Borg (1994a), another with a history of association with the Jesus Seminar’s views,  rejects the historical birth details about Jesus: Luke Timothy Johnson’s (1996) assessment of  retired Episcopal Bishop John Shelby Spong’s view is that “Mary was ‘really’ a teenaged girl who was raped and became pregnant with an illegitimate child. She was then taken under the protection of Joseph” (p. 33).
Johnson (1996) is convinced that “Spong is not so much interested, however, in what ‘really happened’ as he is in freeing Christianity from its dogmatic entanglements, which he more of less identifies with fundamentalism. Spong is hostile to the birth narratives” (p. 33). Spong (1992) wrote: Johnson’s (1996) comment is perceptive and pointed: “Having a bishop with opinions like these is a bit like hiring a plumber who wants to ‘rethink pipes'” (p. 33).

Some of the difficulties with Isaiah 7:14

The verse from Isaiah is controversial in its interpretation. The main difficulty is seen in two different ways of translating it:

The first way according to the  NRSV is: “Look, the young woman is with child and shall bear a son, and shall name him Immanuel.” The Revised Standard Version, New English Bible, Revised English Bible, Good News Bible and the New Jerusalem Bible also support this kind of translation.

The second view, as with the NIV, reads: “The virgin will be with child and will give birth to a son, and will call him Immanuel” (also supported by the Amplified Bible, King James Version, New American Standard Bible, English Standard Version, the New Living Translation and the New American Bible.)

The supposed conflict in these two different translations is demonstrated: Was this prophesied child, who would be called, “Immanuel,” born to a “young woman” or was she “a virgin”? The difference has considerable implications. If she were a young woman, it does not guarantee that she was a virgin.

1.    The Hebrew word in Isaiah 7:14 that is translated, “young woman” or “virgin” is “almah.” If we are going to defend the virgin birth, we must be honest with this word’s meaning. “Almah” does not actually indicate virginity, but probably means “a young woman of marriageable age.” The Hebrews used the word “bethulah” if they meant “virgin” (Machen, 1930 [1974], p. 288). However, there are some other ramifications.

It is “reasonably clear in its context” in Matthew that “Mary is the virgin; Jesus is her son, Immanuel” (Carson, 1984, p. 77). The problem is exacerbated by the translation of the Hebrew word, “Almah,” in Isa. 7:14. Briefly, the issues include:

That is generally so, until we meet exceptions such as Prov. 30:19, which reads, “the way of a man with a maiden” (NIV). Here we “cannot be certain the word necessarily means [virgin].” But “it is fair to say that most OT occurrences presuppose that the almah is a virgin” (Carson, 1984, p. 77).

2.    The other Hebrew word, “Bethulah,” that is often translated “virgin … can refer to a married woman” as in Joel 1:8 (Carson, 1984, p. 77).
There is an additional problem. In about 250 B.C., the Hebrews completed the translation of the Hebrew Old Testament into Greek, known as the Septuagint (LXX). The translators, for the Hebrew “almah,” used the Greek word, “parthenos,” which is the one that is used in Matt. 1:23 and Luke 1:27 for Mary the “virgin.” However the LXX translation is about 300 years earlier than the gospel writings. Had the meaning, therefore, changed during these three centuries?

Genesis 34:4 indicates that Dinah is a “parthenos” (LXX). However, the previous verse affirms that she is not a virgin. Why, then, would one want to translate “parthenos” in Matthew and Luke as “virgin” instead of “young woman”? “Virgin” is the preferred translation in the gospels because “the overwhelming majority of the occurrences of “parthenos” in both biblical and profane Greek require the rendering ‘virgin'” (Carson, 1984, p. 78).

Matt. 1:25 makes Mary’s virginity very clear: ” But he [Joseph] had no union with her until she gave birth to a son. And he gave him the name Jesus” (NIV). This works on the assumption that Mary was a virgin at the time of her marriage to Joseph.

How do we resolve this issue?

We must be honest with the text. The most satisfactory explanation of Isaiah 7:14 seems to be:

2.    There is a double fulfillment. One is in Isaiah’s day for the tribes of Judah and Ephraim.

The Lord’s wrath and judgment would come against these tribes, inflicted by the Assyrian invasion. God’s foes would be destroyed and there would be salvation for the remnant “and the promise of a glorious hope as the Davidic monarch reigns and brings prosperity to his people (9:1-7; 11:1-16)” (Carson, 1984, p. 79)

4.   We can conclude that the Immanuel of Isa. 7:14 is a Messianic figure.
Matthew, under the inspiration of the Holy Spirit, grasped that clearly. He wants to leave no doubt about the nature of Jesus’ conception to the virgin. He adds that Joseph had no sexual intercourse with Mary until after Jesus was born. Matt. 1:25 literally says that he “was not knowing her” until she gave birth to a son. This is an old Jewish way of saying that he did not have sexual intercourse with her after she had given birth. “The ‘until’ clause most naturally means that Mary and Joseph enjoyed normal conjugal relations after Jesus’ birth” (Carson, 1984, p. 81).

We know this because Matt. 12:46 and 13:55 speak of Jesus’ mother and brothers. This is a clear refutation of the Roman Catholic and Eastern Orthodox doctrine of Mary’s perpetual virginity.

And Mary said to the angel,
“How will this be, since I am a virgin?”
And the angel answered her,
“The Holy Spirit will come upon you,
and the power of the Most High will overshadow you;
therefore the child to be born will be called holy — the Son of God.”
Luke 1:34-35 (ESV)

3.    The references below include those for both this brief version and the fuller edition of this article.

Crossan, J. D. (1995). Who killed Jesus? Exposing the roots of anti-semitism in the gospel story of the death of Jesus. San Francisco: HarperSanFrancisco.

Johnson, L. T. (1996). The real Jesus: The misguided quest for the historical Jesus and the truth of the traditional gospels. San Francisco: HarperSanFrancisco.

Lyon, J. (1994, July 17)). Gospel truth: Will Christians accept a revolutionary portrait of Jesus that is based on scholarship, not faith? Chicago Tribune Magazine.

Mack, B. L. (1988). A myth of innocence: Mark and Christian origins. Philadelphia: Fortress.

Mack, B. L. (1993a). The lost gospel: The book of Q & Christian origins. San Francisco: HarperSanFrancisco.

Mack, B. L. (1995). Who wrote the New Testament? The making of the Christian myth. San Francisco: HarperSanFrancisco.

Phillips, J. B. (1967). Ring of truth: A translator’s testimony. London: Hodder and Stoughton.

Witherington III, B. (1997). The Jesus quest: The third search for the Jew of Nazareth (2nd. ed.). Downers Grove: InterVarsity Press.