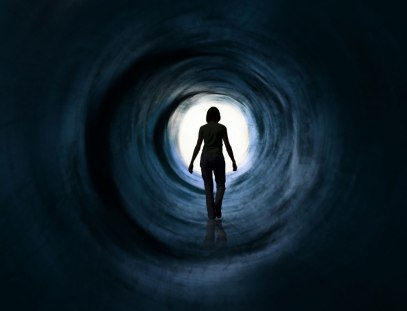 Jana Wendt’s “Witness” program on Channel 7 (Australia) dealing with those who have had near-death experiences (NDE) on October 8, 1996, presented a biased version of NDE’s where they saw a light at the end of a tunnel.

Maurice S. Rawlings, M.D. was a specialist in cardiovascular diseases at the Diagnostic Center and the area hospitals of Chattanooga, Tennessee.[1] He has documented another side that is very seldom reported. He has written two books dealing with this: Beyond Death’s Door[2] and To Hell and Back.[3]

In the latter book, he writes that “of the numerous authors investigating near-death experiences, almost none of them report negative or unpleasant cases… None of them seem to believe in a place called hell.”[4] He states that

“To broaden the exposure data of the authors who write of euphoric NDEs and OBEs, I have offered some of the negative experiences we have collected for their personal touch and interview, but they have all refused.

1. One author declined because negative data would interfere with positive results already collected.

2. Another passed because the information would modify conclusions already published.

3. A third, the legendary and broadly respected Dr. Elisabeth Kubler-Ross, would not say why she refused but declined the offer anyhow. Such lack of interest in broadened research is troubling.”[5]

Charlie was needing CPR and a temporary pacemaker. Dr. Rawlings reported that

“Whenever I stopped pushing on his chest in order to adjust the pacemaker, the heart would stop, and Charlie’s eyes would roll up, he again would sputter, turn blue, and begin to convulse.

“With bare hands, just like you can, I would reach over and start him up again. But this time he was screaming the words, `Don’t stop! I’m in hell! I’m in hell…. For God’s sake, don’t stop! Don’t you understand? Every time you let go I’m back in hell!'”[6]

Another patient “saw the being of light at the end of the tunnel, but the light soon turned into blazing fire, igniting the tunnel walls as he went by. He called it the `fire of hell.'”[7]

Curt Jurgens, a German actor, had a negative experience when his heart frequently stopped during a four-hour operation by Dr. Michael DeBakey in Houston, Texas, to replace part of an aorta (the main blood vessel). He reported:

“I could no longer shut out the frightful truth: beyond the faces dominating this fiery world were faces of the damned. I had a feeling of despair… the sensation of horror was so great it choked me.

“Obviously I was in Hell itself, and the glowing tongues of fire could be reaching me any minute.”[8]

“I was moving through a vacuum as if life never ended, so black you could almost touch it. Black, frightening, and desolate. I was all alone somewhere in outer space…

“I knew it was Hell, but there was no fire or heat or anything that I had expected.

“I was alone, isolated from all sound, until I heard a mumbling, and I could vaguely see a kneeling form. It was my wife. She was praying at my bedside. I never wanted to be a Christian, but I surely am now. Hell is too real.”[9]

Dr. Rawlings speaks of others who support his view:

“Fortunately, a few observers are beginning to disagree. One of the disagreements was by researcher Dr. Charles Garfield who noted, `Not everyone dies a blissful, accepting death… Almost as many of the dying patients interviewed reported negative visions (demons and so forth), as reported blissful experiences, while some reported both.’[10] Note his ratio of roughly 50/50 for negative positive. I am not the only researcher claiming large amounts of existing negative material!”[11]

[1]Dr. Rawlings “was appointed to the National Teaching Faculty of the American Heart Association, specialising in teaching methods for the retrieval of patients from sudden death. He taught at various medical schools and hospitals and conducted courses for doctors and nurses in many countries. Dr Rawlings is clinical assistant professor of medicine for the University of Tennessee at Chattanooga, a member of the International Committee on Cardiovascular Diseases, etc.” (To Hell and Back, p. 256).